To the First Blind Sailor to Cross an Ocean Single-handedly– Belated Birthday Greetings! 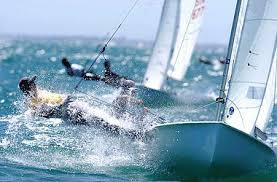 Stiff competition in a Sailboat Race

To the First Blind Sailor to Cross an Ocean Single-handedly– Belated Birthday Greetings!

Readers of this blog know that a tradition began in April of congratulating a renowned blind person on the date of their birth.  I’m sure the delay in celebrating the May 31 birthday of Geoff Hilton-Barber will be forgiven.  First I had to find a blind person born in May.  I found Geoff in former Tampa Lighthouse Executive Director Cliff Olstrom’s book Undaunted by Blindness, a compilation of 400 mini-biographies.

Then I had to find Geoff, who happens to live in South Africa.  Fortunately for me, I know someone from South Africa, Ruchel Coetzee, a writer and journalist par excellence who did the first video for the Lighthouse of Broward.  We stayed in touch and she had no problem with my crazy idea that of course she would know everyone in South Africa.  The funny thing is, they are all from the same hometown, Durban. She emailed Geoff’s brother Miles who also is a blind athlete and advocate, and Geoff’s wife Natalie replied!

So I emailed Geoff and he agreed to answer some questions for us.

But first, a little context.  Cliff’s  book described him as a parachutist, white water rafter, sailor, marathon runner, tandem bike racer and mountain climber.  Actually, Geoff has run over 40 marathons and ultra marathons, including the Moroccan Marathon des Sables, a six day 251 km marathon known as the The Toughest Foot Race on Earth, twice.  That’s 156 miles, and he had to carry a backpack with his supplies.  He has climbed Mount Kilimanjaro three times, escorting blind teenagers.  So when sailing magazines say you have to be in good shape to prepare for a solo sailing adventure, you can be sure Geoff could check off that requirement from the list.  He started losing his sight in his twenties, from retinitis pigmentosa, and by age forty he was totally blind.

The January 21, 1998 edition of the bi-monthly magazine of the South African Council of the Blind burst with the astounding news that “South African yachtsman Geoff Hilton-Barber has become the first blind sailor to sail an ocean single-handedly – successfully navigating the treacherous Indian Ocean from Durban to Fremantle, Australia, defying friends, family and experts who termed his endeavor ‘a suicide mission.’” By the way, it was the first time he had sailed solo.

So here are the questions I emailed him.

Elly:  What is your perspective on creating an inclusive, accessible world for people who are blind or visually impaired?

Geoff:  Just thinking of the word inclusive.  While I have no quick answers to solve the plight of so many blind people, the world today offers so many more opportunities to blind people than ever before, especially with the wonderful assistive devices at our fingertips.  My brother Miles has often said that it is not the hand you have been dealt in life, but the way you play it…

I also vividly remember a conversation with other friends after a sports meeting for the disabled.  It was generally agreed that there is a fence between able bodied & disabled people – just look at all the jokes we are not able to tell.  Anyway, while the essence of the conversation was a general unhappy feeling about this fence, one unforgettable comment was – “yes, and we so often choose to stay behind it.”

Elly, this fence may not be barbed wire, but maybe the too ready acceptance of our blindness together with expectation of life-long benefits & support – possibly eroding our desire to be competitive in the “outside world” with its own huge unemployment problems…

Elly, participation in sport undoubtedly helped me cope with being blind.

E:  You set off on a 4500 mile trip that took you through the Roaring 40’s—the southern Indian Ocean between latitudes 40S and 50S got that nickname and I’m sure it describes a monster.  Why did you name your sailboat “Abacus?”

G:  Very few folk ask me why I named my yacht Abacus… 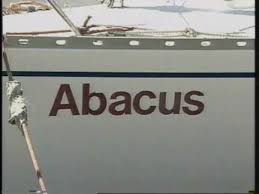 I have fitted out three sailboats from “hull & deck” over the 25 years I sailed.  A 22 foot Mistral – which I named Goofus.  One evening while working on her I listened to a song on the radio – “Sounds a little Goofus to me”  The name just stuck!

I named my Spirit 28 foot “Straws”.  My dad gave me a book when I was a youngster – “Alone in the Wind” by Mike O’Reilly, his account of the early days of parachuting.  I have a feeling that this book inspired me. I participated in the sport for around five years until my sight forced me to give it up – I was honestly an accident waiting to happen.  Back to the name.  One of the chapters in the book was “Straws in the Wind” – all about the comradeship and yarning in the pub after a day’s jumping.  The name had great meaning for me.

And onto Abacus…  One of the very first talking computers was the Eureka and I enjoyed learning to programme in Basic  with it.  When I was the director of the Natal Society for the Blind we organised regular long cane rallies around the streets of Durban.  I wrote a programme to log the start & finish times of all the contestants on my Eureka and felt very proud of myself.  On one of the events my battery went flat & I very disgustedly remember saying that I might as well have had an abacus to run the event.  When I was fitting out my 33 footer with some blind friendly instruments in mind, “Abacus” it just had to be…

E:  When you reached a low point in your journey – how did you overcome it?

G:  Elly, a one line answer to a one line question is, I had to trust in myself, my boat & equipment, advice from my team & to “just stick it out.” However, without going into too much detail, the worst part of the voyage and, yes, a really low point, was being unable to sail out of the “roaring 40s” for a week.  The waves were simply too high & fast for my wind vane self-steering to sail more than 30 degrees off downwind.  I had had a knock down which “sea watered” my alternator & my poor, overworked wind generator seized up in a force 8 gale and sheared off the support.  I was left, some 1,000 miles from Fremantle with no ability to generate electricity – vital for nav & communications.  I was at risk of being blown too far east to make the Australian west coast & would have been blown into the Great Bight – a deadly place to be for any yachtsman.  I had a decision to make – either declare a Mayday and possibly be rescued or hope for a wind change to enable me to get north in time.  My biggest risk was running out of electricity from the batteries & not being able to navigate or let people know where I was…

I was very depressed and tired for those 3 days.

Anyway, once the front passed through, I had a south westerly wind which helped me get the hell out of the forties and head for Fremantle.  My team arranged a spare battery which was dropped off by a ship some 300 miles from home together with a member of my team who helped me make it to Fremantle after 52 days at sea.

E:  I admit I had to look up a few words in that last answer and also whip out my Atlas to check out the  location of the Great Australian Bight.  If Geoff thinks it is a terrible place to be in a yacht, after what he already had experienced, well, that’s enough evidence for me.

What is it about being born in Africa that gives you the courage and strength to achieve the impossible?

G:  Other than having had the absolute freedom to explore & take risks from an early age, I am not sure that being born in Africa made me what I am.

E:  Who were your role models?  Who instilled confidence and drive in you and taught you that anything and everything is possible?

G:  A difficult one.  During my parachuting, road running & sailing days, I met people who accepted me despite my loss of vision, and made me believe in myself.  Without that confidence, I am sure that I would not have dared to dream that I could sail single-handed.

However, having said that, there are two people who did inspire & challenge me to attempt my voyage.  Sad to say I have forgotten their names & I hope that you can help me here…  They are the two partially sighted American sailors who attempted to sail from New York to England, & here I am probably going back some 30 years.  I very distinctly remember hearing that a blind sailor had set out from NY to cross the Atlantic to England. I was amazed to think that this might even be possible and started thinking about how a blind person could take on such a challenge… Just the navigation seemed impossible, never mind the sail handling, steering, etc, etc…  I have a feeling that this first attempt planted a seed in me to think about how I could sail my own boat and to the extent that I sold my 28 footer and bought the hull & deck of my Charger 33…  Sadly, this (other man’s) attempt failed, but the seed was still growing in my head.

When, a few years later,  I heard that a second blind person had set sail for England, I remember a feeling of anger at myself that I had not put more thought & effort into single-handed sailing.  When I heard that this attempt had also not succeeded, I decided that there was no reason why the first blind person to sail single-handed across an ocean could not be a South African & this would be me!

I have finally decided to write about my voyage and would really like to find out more about the two American attempts.  Would you be able to find out their names & contact details?  Possibly the NFB could help?  And yes, I realise that they were my role models.

G:  After running three welfare organisations for 26 years, I started my own project management & fundraising business which I still run today.  I presently raise funds for a major organisation for the blind in Pretoria, an early childhood development & after-care centre in Johannesburg, a farm-based organisation for intellectually impaired adults & a centre for abused women & children in Durban.

Why?  I love what I do & cannot really afford to retire just yet – I doubt that I ever will…

E: I am very grateful for the time and effort Geoff gave to me for this blog post.  I also want to thank my friend Ruchel Coetzee (check out her book, Pulani, for a fascinating account  of growing up in apartheid South Africa—it’s on Amazon).  Of course I thank Cliff Olstrom for writing Undaunted by Blindness.  And I thank Google for helping me find the blind sailors who may be the ones Geoff asked me about (Jim Dickson and Hank Dekker).  I also found YouTube has a recording of The Carpenters singing “Goofus.”  Finally, the Law of Six Degrees of Separation—except I think the world has shrunk and now it probably is just 3 Degrees, maximum.

If you are interested in the equipment Geoff used, email me at [email protected] with the subject line SAILING and I’ll send you the  articles he wrote about his whole setup.