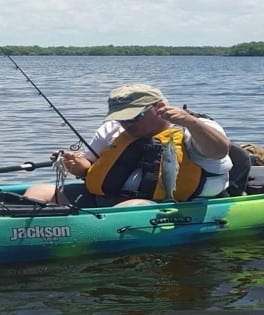 George Tice introduces himself on his Facebook page, Blind Angler Veteran of SWFL, in the same direct way he speaks: “I’m a Desert Storm veteran with PTSD and to top it all off I’m blind. Please don’t think that any of these life changing events has or will stop me from doing what I love and live for, Fishing.”

When he went blind, suddenly, in January 2017, George didn’t waste any time before he began figuring out how to get back to fishing.  So it made sense to start our recent conversation by asking, “What is it about fishing that caught you?”

George:  I served in the Army in Desert Storm.  When I came home, I took up fishing to relieve the stress and deal with PTSD.  I joined a fishing group made up of a bunch of veterans.

Elly:  So you started fishing as an adult, to deal with PTSD (post-traumatic stress disorder), and being with other veterans put you in a comfort zone, too.

G:  Yes, fishing is the only peace of mind that I get. The time fishing keeps me calm and it helps me tune my body and soul together.  The Heroes on the Water group specifically relates to PTSD. 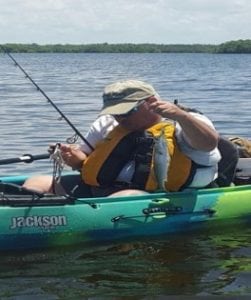 Fishing with Heroes on the Water

E:  So who actually taught you to fish?

G:  I taught myself how to fish.  Then I joined other vets who also were fishing, all to deal with PTSD.  Then, since going blind, it took me about 6 months to relearn how to tie knots, bait hooks, remove fish.  My wife helped me find YouTube videos, and I tried to remember.  Everyone always asks me, “How do you know how far to cast?”  I always have someone else fishing with me and I ask how far is the shore or the area that I’m fishing.  I never go fishing alone.  I can cast, but I don’t necessarily know what I’ve caught.  Maybe a stingray or a shark.

Recently, I won a rod-building kit in a contest, so I built it for this other group – American Military Veterans Foundation and their tournament this past Memorial Day.  I placed 10th out of 67 anglers. 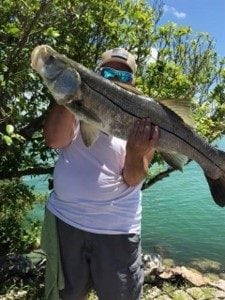 George with a huge 39″ Snook

George’s facebook page announces the next tournament with Heroes on the Water, July 29th  which will be fishing for Tarpon and Red Fish.  The tournament will be using kayaks.

G:  I’ve gone kayak fishing and I love it. I really get the feel for fishing then.  I want to be the first disabled blind kayak ranking angler in Florida.

I had to admit my ignorance but had to ask what he means by a “ranking angler?”

G:  I want to go full-time with fishing.  If I win a lot more tournaments, I can be ranked and get sponsors to support my competing in other tournaments, using the sponsors’ equipment.

E:  What did you do after Iraq?

G:  I did loss prevention for different department stores.  I ended up Loss Prevention Manager with COSTCO in 2001.  I transferred and we moved to Florida in 2004, mainly to be able to do more fishing.

But the decision to move where there was more fishing would eventually prove to be even more significant for George and his family than they could have known. A few towns up the coast from their new home was Circus Sarasota, in Fort Myers.

G:  My daughter was a little girl when we came, and she wanted to go to Circus Sarasota everyday.  So we did, and eventually we met the owner of the circus, the head clown, and all the performers.  It was inspiring.

He also met Nik Wallenda. Wikipedia describes Nik as an American acrobat, aerialist, daredevil, high wire artist, and author known for his high-wire performances without a safety net. He is the great-grandson of the famous Karl Wallenda (“The Flying Wallendas”), and Nik holds the record for the highest blindfolded walk ever, 557.89 feet above the ground, between Marina City West tower and Marina City East tower, in Chicago.

E:  You became blind about a year ago and entered the Lighthouse of Collier (LOC) vision rehabilitation program almost immediately.

G:  I came home from the hospital in January, 2017 and started my YouTube research related to fishing, in February.  Since I had open heart surgery, I was going to rehab and one of the staff at the facility told me about Lighthouse of Collier.  So my wife got me a white and red cane at Walmart and we went to LOC.  I learned right away we got the wrong kind of cane at Walmart, and that I needed  to keep going back to LOC.  I’ll always go back there—they are the best and it meant everything to me to learn what they taught me.

E:  I hear you learned a lot of technology.  What are your main uses for technology?

G:  (chuckling) Yes, I practice a lot.  It all takes twice as long.  I use JAWS (computer software that reads aloud whatever is on the computer screen).  I also have Orcam glasses (wearable artificial vision device designed to assist people who have reading disabilities).  I love them but I hope they come out with some advances.  It’s hard to hear when I’m trying to read the menu in a noisy restaurant.  And I want them to have Bluetooth and a GPS connection.  I walk a lot.  It’s very cool to know which way to go.  I’m also hoping for a sensor to tell me about obstacles when I’m in my kayak.

I have been doing public relations, marketing and fundraising in my role as Vice Commander of the American Legion and also for the Police Athletic League.  We did a huge military night with the Fort Myers Miracles (minor league baseball team for the Minnesota Twins) where we brought twenty different veteran organizations representing the region between Punta Gorda and Collier County to honor Gold Star mothers of Southwest Florida and the American Red Cross.  People don’t realize the Red Cross plays a big role helping service members overseas get home to attend a funeral or see a critically ill family member.  The Red Cross contacts the commander of the unit and that person is allowed to go home immediately.

E:  Typically, a person who becomes blind stays at home for a few years before accepting the advice of friends or family and visiting an agency that provides vision rehabilitation training.

G:  It has been hard–on my family, too.  It’s all about the learning curve.  But I vowed to myself not to let things hold me back.  A friend who walked a tightrope across the Grand Canyon and Niagara Falls told me, “never give up.”

That friend is Nik Wallenda, the record holder in blindfold high wire walking, whom George first met thirteen years ago.

Never Give Up.  That is my spirit today.

George is working on his autobiograpy, to be titled The Blind Man Fishing.

Find an agency in Florida near you:  https://beyondvisionloss.org/florida-agencies-serving-the-blind-locations/