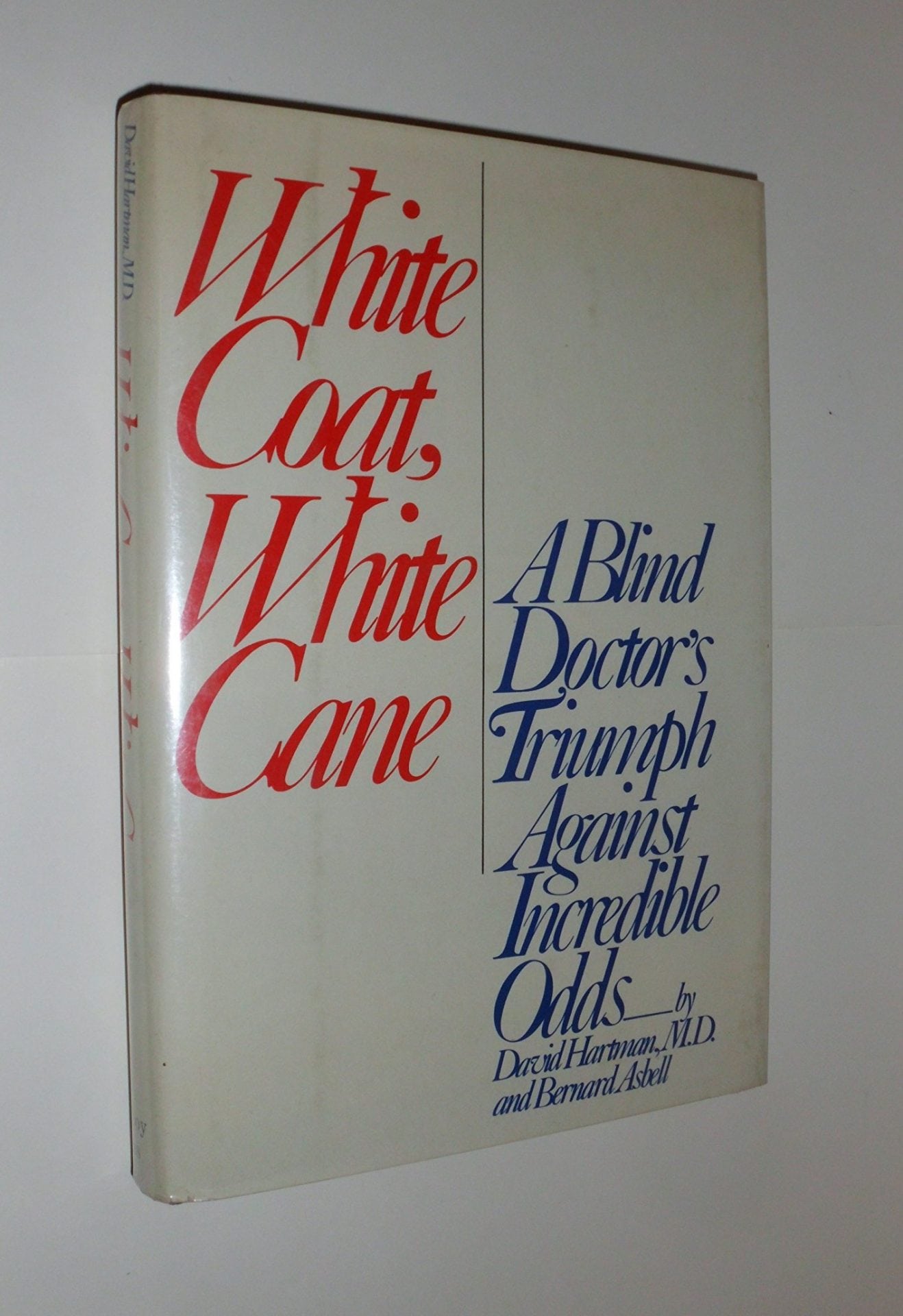 Among many June birthdays of notable people who are blind, here are two that perhaps can be linked, however indirectly.  David Hartman is the first blind person to graduate from medical school.  He was born on June 25,1949.  On June 27, the world also celebrates the 138th birthday of Helen Keller.  She may have been thinking of a high achiever like Dr. Hartman when she said,

“Be of good cheer. Do not think of today’s failures, but of the success that may come tomorrow. You have set yourself a difficult task, but you will succeed if you persevere; and you will find a joy in overcoming obstacles.”

The following story comes from People magazine, written on the occasion of David Hartman’s graduation from Temple University Medical School.  For those of you who remember the 1975 movie made of his early life and struggle to get into med school, Journey from Darkness,  with Marc Singer in the starring role, you will certainly understand the wellspring of emotion that swept the entire audience at the graduation ceremony.  I remember the movie, but not his book, White Coat, White Cane: The Extraordinary Odyssey of a Blind Physician.  I’d buy it, but it costs $249.98 on Amazon, even with Prime.  Time to go to the library. 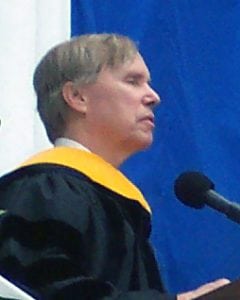 When David Hartman, a 26-year-old Philadelphian, was handed his medical degree at Temple University in May, an extraordinary thing happened. First his classmates began to applaud. Then their families, the faculty and university officials joined in. Within a few minutes all 10,000 people in Convention Hall stood and cheered, many of them weeping.

Dr. Hartman’s face shone with pride, but he remained in control. He is an unsentimental young man who cannot indulge himself in wild swings of emotion. Dave Hartman is blind, the first blind American ever to complete pre-med and medical studies.

He was born in suburban Haverford, Pa. with malformed lenses which impaired his vision. At 8 he developed glaucoma and detached retinas. After three operations, young Hartman learned he would never see again.

David’s father, a banker, and his mother and sister worked to make him self-sufficient and useful. His sister taught him to dry dishes carefully. So his son could learn archery, Fred Hartman attached a bell to the target, and David aimed at the tinkle. His father’s credo was: “You’ll never know if you can do it unless you try.” At Haverford high school, Dave wrestled and ran with the cross-country team (guided by a rope held by another runner).

The obstacles to becoming a doctor looked insurmountable to everyone but David. His mother suggested less demanding careers, and he politely demurred. He was looking for the toughest challenge he could find.

David plunged into premed at Gettysburg College and came out with a Phi Beta Kappa key and a fiancée. He and Cheri Walker had double-dated, but with other people. They discovered they got along better with each other than with their dates. The friendship blossomed, and in 1973 they were married. Is it hard being a blind man’s wife? No, says Cheri Hartman. “We divide everything equally. I do the shopping, David cleans house.” Cheri is now a doctoral student in educational psychology at Temple.

Nine medical schools turned David down before Temple courageously decided to give him a chance. From the first semester on, he stayed in the top fifth of his class. Hartman’s success required a massive collaboration of effort, not only from classmates and professors but from volunteers who taped medical textbooks (700 hours of them) and exams. In histology, instead of identifying tissue slides through a microscope, he identified them from an oral description. Hartman performed well in anatomical dissections because “a lot of surgery is done by touch.” His professors taught him to “feel” his way through a diagnosis, guiding his hands over organs, viscera and diseased tissue.

Hartman has still harder work ahead. This fall he begins a year’s internship at Temple University Hospital, followed by three years of residency at the University of Pennsylvania hospital and two more at Temple. He will specialize in psychiatry and rehabilitative medicine.

He thinks his blindness may turn out to be an asset in that specialty. “Many people feel nervous when a psychiatrist looks at them,” Dr. Hartman says, “as if somehow he has inside information which exposes them. My patients might feel more comfortable.”

Dr. Hartman appears astonishingly well-adjusted. “Everyone is handicapped in some way,” he says. “My blindness put my life into focus.”

The People story ends there, giving us an inkling of the crucial support from family and friends but still leaving us to wonder what was the source of his unstoppable perseverence, the quality urged upon us all by Helen Keller.

A September 21, 2012 guest post to Dan Casey’s column in The Roanoke Times offered an interesting back story that reveals the young doctor’s humility, gratitude and humor.  Perhaps these are the qualities that also feed his resilience.

Choosing to remain anonymous due to the personal nature of mental illness, the author of the guest post told of a girl scout trip she took to Overbrook School for the Blind in the 1970s, where David had been a student from 3rd to 6th grades. She wrote, “After a tour of the facility, we were treated to a ‘lecture’ by a gentleman who showed us how to weave baskets.  He was a graduate of the facility and showed us how blindness did not hamper his crafting skills.  But he shared something even more impressive, something that I never forgot, a success story that I have often shared over the years.

“He attended the training school to appease his grandmother who wanted him to have a vocation to fall back on.  Something he could do, and do well.  A way to have a livelihood to support himself, because, after all, he was blind.  He became a basketmaker.  In his free time, he pursued his own dream, to become a doctor, a psychiatrist.  He shared with us, that he was in fact, a doctor who was volunteering at his alma mater to show people that if you have enough determination, blindness would not hold you back from following your dreams.

“Fast forward about 35 years.  I had moved from New England to Roanoke.  I took my daughter to see her new psychiatrist at Carilion.  I saw a gentlemen with a white cane deftly moving down the hall.  I saw the face, a little bit older, of the man who first told me, all of those years ago, that anyone could pretty much be anything they set their minds to, blind or not.

“To my daughter’s embarrassment, I couldn’t help myself, “Dr. Hartman?”  He stopped and turned towards me, “Yes?”  I apologized for bothering him.  He said that it was no bother and invited me into his office where I told him that we had met before.  I shared the circumstances and thanked him for teaching an 8th grader a lesson in life.  He sat back in his chair and laughed softly, then thanked me, for taking the time to seek him out.

“I see him frequently, from a distance, as we sit in the waiting room.  But the sight of him never fails to bring back the awe, the memories, and the marvel that after all of these years, the journeys through life that we have separately traveled, what are the odds that our paths would cross again.  What are the odds?”

In conclusion, David Hartman, MD is a board certified psychiatrist, licensed to practice medicine in Virginia.  He is affiliated with Carilion Roanoke Memorial Hospital and an Associate Professor at Virginia Tech Carilion School of Medicine.

How many lessons has his story given us today?