Blindness Is Not My Greatest Challenge 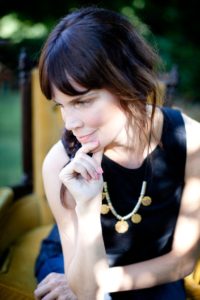 “Most people think my greatest life challenge is blindness; I’ve been blind since age three.  But that simply isn’t true,” says Ginny Owens, a singer and songwriter who became a household name when she was named Gospel Music Association’s 2000 New Artist of the Year.   “My greatest challenge is doing battle with the critical voices in my head that distract me from what’s most important.  It’s the whispers of those who feel sorry for me because of my physical challenge and don’t think I hear their comments.”  Besides her success in her music career, Ginny chooses to educate about blindness and vision rehabilitation through her YouTube blog.  Readers of Florida ASB’s blog can thank her and wish her well on her birthday, April 22!

Born in Jackson, Mississippi, she reports her parents insisted on giving her a normal childhood.   “With their blessing, I grew up doing everything the other kids did. (When my peers started getting their drivers licenses, I finally realized there were some things in life I just wouldn’t be able to conquer.)”

As a singer and songwriter, she has won numerous awards and has sold over one million records in her career that includes success both in Christian and mainstream music.  She also is a speaker and “laughter enthusiast.”  Ginny’s YouTube blog is  entitled “How I See It.”  She demonstrates some of the key elements of Vision Rehabilitation as it is provided by Florida Agencies Serving the Blind (https://beyondvisionloss.org/florida-agencies-serving-the-blind-locations/).  For instance, she explains how she identifies money, grocery shops, bakes, reads braille, uses an iPhone, puts on makeup, picks out clothes, and plays the piano.  Of course, her music videos predominate!

Folks on the First Coast of Florida are in for a special treat April 28, 2018 when Ginny sings at the Salty Church in Ormond Beach, FL.  http://ginnyowens.com/#tour  If you go, be sure to wish her a happy birthday!  She also is on Facebook Live every Sunday at 6:30 p.m. and every Wednesday at 9:30 a.m.

Thank you to the following sources on the web:  All Access Music Group, Wikipedia, www.GinnyOwens.com, and to the book Undaunted by Blindness by Florida author and former CEO of Tampa Lighthouse, Clifford E. Olstrom.