Andrew and the Angel

ANDREW AND THE ANGEL – How one Teacher for the Visually Impaired changed the world.

Before he reached the age of 12, Andrew Meit already was studying and practicing Houdini’s magical escapes, picking locks, and diving deeply into the art and science of Leonardo DaVinci, and reading literature and philosophy extensively from his father’s set of the Great Books of the Western World.  He also was 4 grades behind his age in school due to his poor results on standardized testing, and he was expelled for fighting.  “I was  defending another student–please don’t give  your readers the impression I was a bully!” 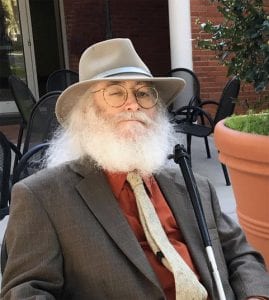 Legally blind and severely hard of hearing, and struggling with learning problems related to congenital rubella, Andrew was marginalized in Kentucky and New York school systems thrust into the early days of mainstreaming, and unprepared to factor his disabilities into the instructional environment of their public schools.  The frustration made him angry, depressed and afraid.  His parents did not know what to do.

Meanwhile, the family relocated to Shaker Heights, Ohio.  Now, the school recommended institutionalization in a school for cognitively disabled children, unless somehow he could catch up in the next 18 months.

His mother asked him if he could give up everything—his hobbies, his time with friends—and study non-stop for 18 months with a tutor in a last ditch effort to catch up?  Determined to move forward, Andrew said, Yes.  After all, what choice did he have?  He felt he might become stuck in an institution.

A long line of candidates began interviewing with his parents.  Then, Mrs. Trudy Paul arrived.  She knew Andrew’s dismal academic record before she came, but she had been an early pioneer in the new field of “special education” and had several decades of experience both teaching disabled children, and dealing with school system dynamics.

When she arrived at his home, she stunned the family.  Putting a protective arm around Andrew’s shoulders, she announced her first step was to listen to him, not talk behind closed doors with his parents.  She spent the next four hours alone with him as he described the collections and drawings and magic studies spread throughout his bedroom.

She emerged and told his parents he was gifted, and his problems in school came from his anger at being short changed due to his teachers’ failures to accommodate his disabilities.  His parents hired her.  She worked with Andrew after school for four hours, six days a week.  He gave up his hobbies and play time with his friends and learned math and science and writing.

One day, looking out his bedroom window at children playing across the street, he told Miss Trudy that he felt so desperate wanting to go out and play.  She turned him to face her and said, “I see those children, too, and they don’t have something you do have.   You have the ability to learn anything you choose to learn and the rare talent to be your own teacher.”

Predictably, his progress threatened his classroom teacher, an old-school disciplinarian.  Twelve months into the tutoring schedule, she accused him of getting “too much help” from his tutor, casting doubt that his reading level now actually surpassed his peers.   So nervous that he could barely speak, Andrew endured a round of questioning from the principal and other teachers.  He won the day, but he lost Mrs. Paul.  His family decided he could go on without her — “stand on his own two feet” is what they said. Andrew mourned the loss and the premature conclusion of his tutoring, but persevered.  The woman he calls “his angel” had taught him he could advocate for himself, and eventually even help others to do so.  He knew that he would have to do so for the rest of his life.

With the Americans with Disabilities Act still over a decade away, Andrew’s self-advocacy skills and scholarly thirst for knowledge sustained him as he scaled the barriers posed by college requirements that thwarted most students with even one disability–and he had three.  Bouts of depression when forces discouraged him alternated with the joy of learning when he found professors who valued his intellectual contributions.

Incredibly, he did not have a hearing aid or a white cane until years after his 1984 graduation from Stetson University with a Bachelor of Arts in Religious Studies and minors in Mathematics and Philosophy.  While at Stetson, he was a popular tutor for fellow math students and worked on advanced papers with his professors, but his dreams of graduate school were dashed for lack of family support and the social services and institutional structure, including scholarships for older disabled persons, the ADA would eventually require.

Today, he is described as follows on an open website for Jewish poets and scholars:  Andrew Meit is a scholar of the imagination, scholar on Martin Buber, a type designer and software tester, and a Jewish artist who is disabled…. Throughout his life, Andrew has striven to turn his disabilities into well-made art that inspires and celebrates beauty and truth….Recently, after decades of work, Andrew produced a digital recreation of the first page of Genesis from the Gutenberg Bible. 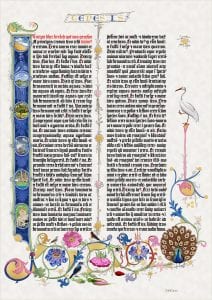 Andrew, once the boy predicted to fail, currently is working on a new translation of Buber’s masterpiece, Ich and Du (I and Thou), a font based on Buber’s handwriting, and recreating in English some select pages of DaVinci’s notebooks.

Andrew’s workspace and another project.

NOTE:  Trudy Paul went on to become the Special Education Coordinator, of Department of Defense Dependents Schools, which were provided at US military posts throughout the entire world.  Her kind but firm approach and respect for the learner inside of every child affected thousands of disabled students for decades to come.